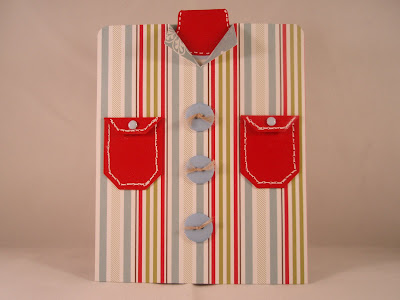 The challenge was to make a masculine card. Immediate thought was to use sombre colours, but as I rifled through my cardstock, my eyes fell on the Ski Slope DSP which I had left over and it was just perfect for this pocket card. The stripes lent itself to being used as a man's shirt and the brief was to use buttons, eyelets, brads etc., so marry the two and I came up with this creation. 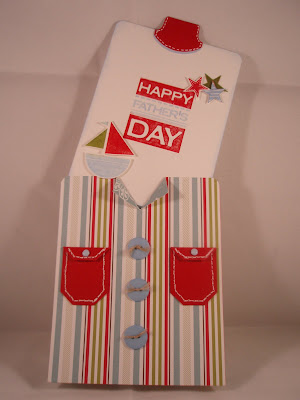 Pull the card out of the shirt to reveal the greeting. Real Red card stock for the pockets punched out with small tag punch, pricked and then faux stitched with white gel pen as was the Real Red round tab. Bashful Blue used for trim round Real Red round tab, Old Olive cardstock for the star, same coloured markers for inking stamps. Buttons were threaded with linen to add interest and sewn onto shirt. Made a 1" cut from centre of top of card and folded back to resemble collar. Incidentally, I drew little white dashes on round tab but did not prick holes in it. I punched extra tags and folded upside down for flaps to pockets, faux stitched and centred a brad on it then stuck down with mini glue dot. 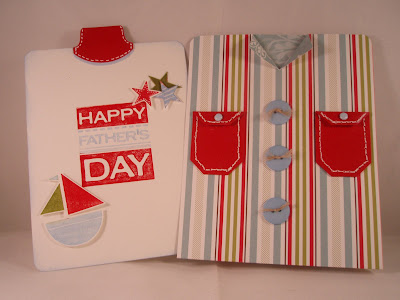 For the card insert I cut a piece of Whisper White 3.5" x 5", rounded the corners on all four corners, inked edges in Bashful Blue. I used markers to ink "Happy Father's Day" from Occasional Greetings, and the boat and stars from Nursery Necessities stamp sets and stamp images on Whisper White card stock. I then cut out some of the images and raised on dimensionals to layer the look and there you have it.