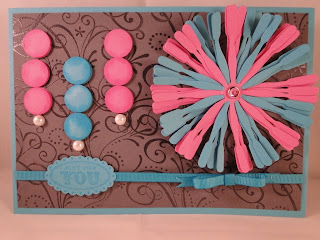 I used the sizzix fringed flower die to cut several layers of flower held together with a rhinestone brad to resemble the silver charm in the picture below. I punched out several 3/4" circles in Tempting Turquoise and Pixie Pink, inked the edges in correlating colours to give it some depth to resemble the flat beads. I inked the So Swirly jumbo wheel with versamark to cover a piece of Basic Grey (to resemble the slate) which was then clear embossed with heat tool for the background. Next, the ribbon was attached so the ends could be tucked underneath the Basic Grey before it was matted and adhered to the Tempting Turquoise base card. This was an A4 sheet folded in half. I then adhered one layer of circles, for the "bead" and another layer raised on dimensionals for added depth and adhered the pearls at the end of each row to resemble the beads being suspended from the bracelet. To complete the card, I added the scalloped oval sentiment "just for you". 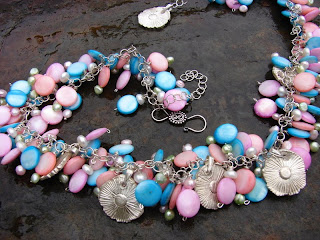 The picture above is the one from which we had to draw inspiration. The colours restricted my colour palette somewhat. There isn't any mirror card in SU's arsenal of card stock, so I had to use Tempting Turquoise and Pixie Pink for the silver charm. The other stipulation was to use a wheel or background stamp of some sort so I used the jumbo wheel "So Swirly". The fringe flower die from Sizzix is one that is used by Stampin' Up! in their US catty so I pushed the boundaries on this one. It seemed perfect for the lines on the charm - it kind of resembles the underside of a mushroom!
Happy Stamping!
Stamps: Oval All
Inks: Bashful Blue, Versamark
Papers: Close to Cocoa, Tempting Turquoise, Bashful Blue
Accessories: Jumbo So Swirly, clear embossing powder, heat tool, sizzix fringe flower die, 3/4" circle punch, Pretties kit, rhinestone brad, Tempting Turquoise grosgrain ribbon, Scallop Oval Punch