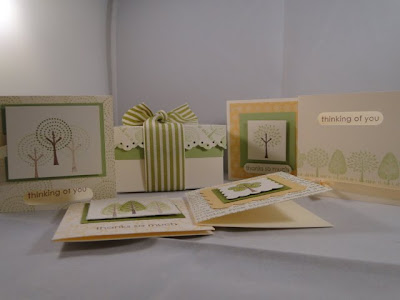 Last Sunday I had a Hostess Appreciation Event and these ladies got to play with some of the new products in Stampin' Up! 2009-2010 Idea Book & Catalogue. They got a sneaky peek at the new catty and a complimentary copy to take home with them including a Make & Take project and a little gift as my way of saying thank you for their support this year. 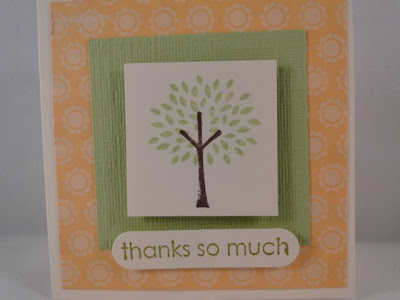 This is probably my favourite of all the tree images. For all the images, this is a two step stamping method using the Stampamajig SU carries, and at long last we have a wonderful new addition - the Word Window Punch! This is a pretty straight foward card which needs little explanation - the DSP used is Washington Apple which was in the Mini catalogue but has now been retired. 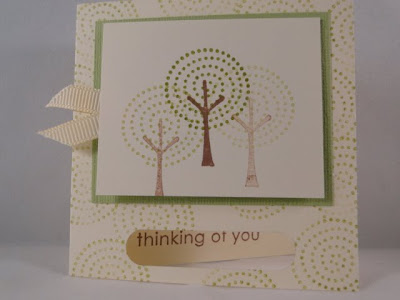 A background using the stamping off technique was used for this card, using the same tree image as illustrated. I inked this tree image in Old Olive and stamped in centre, stamping twice more without re-inking. This was then matted with dimensionals on to a piece of textured Certainly Celery cardstock. A 1/4" wide piece of Very Vanilla grosgrain ribbon was tucked underneath. Having positioned the image, I made a faint pencil mark where I wanted the word window to appear, using it as a guideline for the word window punch. The sentiment was then stamped behind the word window in Chocolate Chip. 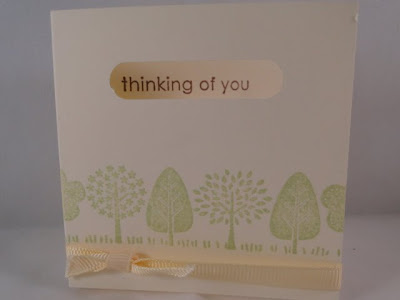 This card used the Funky Forest standard wheel with a Certainly Celery cartridge. The card was opened out and the image was stamped on both front and back of the card. An aperture using the Word Window punch was made at the top and a sentiment inside the card was stamped in Chocolate Chip. 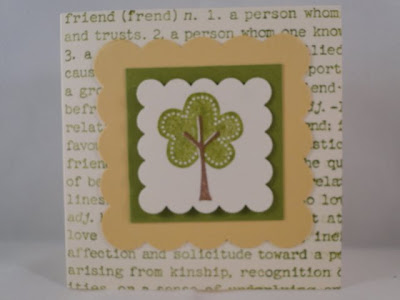 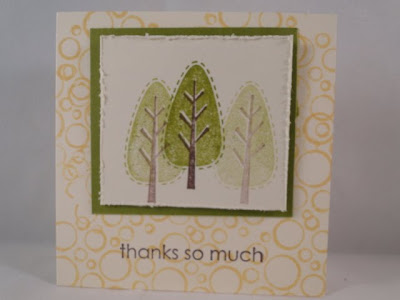 We used one of the Circle Circus stamps to stamp off then stamp on in So Saffron as a background for this card. This Trendy Tree image was inked once, stamped in the middle and stamped twice more without reinking on Very Vanilla. The edges were all distressed and using dimensionals, adhered to an Old Olive mat which was then adhered to card. 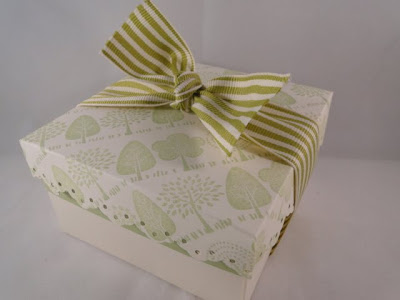 For the lid of the box, we used the Funky Forest Wheel and Certainly Celery cartridge and then used SU Eyelet Border punch to punch all round the edges for a lacy effect. The base of the box had a strip of Certainly Celery all round to add rigidity to the box and also to highlight the lacy border of the lid of box when closed. By using the new very wide 1 1/4" Certainly Celery striped grosgrain ribbon to tie the box, it's already "gift wrapped" ready for giving away as a little gift for that special person!