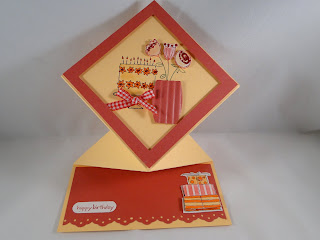 This spring card show cases the cake, flower and presents images from Happy Moments perfectly. The vase was made from a large oval with top and bottom snipped off and then crimped to add texture. The flower image was stamped twice, the first straight on to the card using a stampamajig as a guide, and the second image was coloured, trimmed and raised on dimensionals. I used a two-way glue pen to add adhesive to the flower centres on the cake and around the flowers for the vase and sprinkled with Fine Cosmo Glitter and adhered a red gingham bow to the cake stand.
I cut a square of Ruby Red card stock just a tad smaller and cut an aperture and rasied this on dimensionals to "frame" the cake and vase of flowers. The bottom piece was also cut slightly smaller and one of the longer edges was punched with an eyelet border punch to add interest.
For the bottom layer, the presents were stamped out three times - two on Confetti White, and one on Bride DSP scrap with Black Stazon ink. All images were carefully trimmed. The first one only had the top present coloured. The second had the bottom and top present coloured. This bottom present was trimmed and double mounted on the corresponding present on the first stamped image. The top present from this stamped image also had one of the dots trimmed and this was adhered with a dimensional to the corresponding dot on the top present of the first stamped image. Lastly, the middle present stamped on Bride DSP was trimmed and Ruby Red was sponged with a sponge dauber and adhered with a single layer dimensional to the corresponding present on the second stamped image. So not only is the image tiered, but the layers and its dimensionals are too. Lastly the "Happy Birthday" sentiment was added on the left.

Email ThisBlogThis!Share to TwitterShare to FacebookShare to Pinterest
Labels: Sale-a-bration 2010