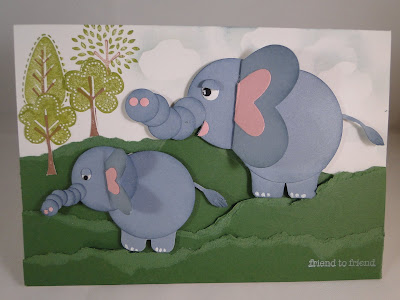 I've got elephants on my brain and knew that if I didn't seize the moment and just get down to actually bringing the idea to life, I'd lie awake thinking of it all night and I'm a terrible insomniac and a light sleeper anyway. So "Nina" and her baby "Tessa" was born! Yes, I've given all my punch art characters a name - sad isn't it. 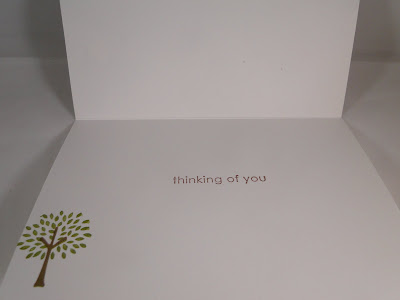 I kept the inside simple!

The inks I used are Close to Cocoa and Old Olive, cardstock was Garden Green and Whisper White.

The elephants were punched from Bordering Blue, pretty much the same punches as used for Nellie and Bessie except for the legs - I punched a round tab and cut it in half and used one half for Nina and the other for Tessa. As Tessa is much smaller, her half had to be trimmed back more. The trunks were just mutiples of small circles and for the nostrils I used the 1/8" punch and 1/16" punch.

I cut a cloud shape out of a Post-It note and used it to mask and sponge to create the cloud effect in the sky.

Thanks for stopping by.