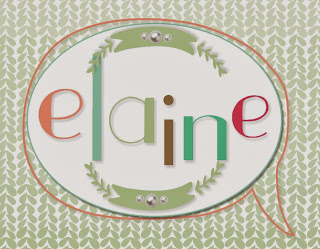 Here's a name tag designed in MDS which I made for Convention using the latest In Colors valid 2013 to 2015. Additional downloads I used was the Empire Alphabet, and for the embellishments I used the Basic Pearls and Rhinestones downloads. 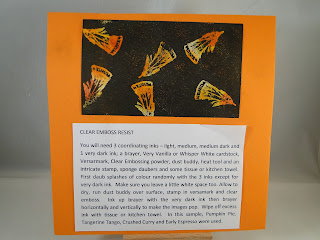 There are so many ways to use the emboss resist technique and for this one, we used brayering to make those images pop!  My club ladies loved it! 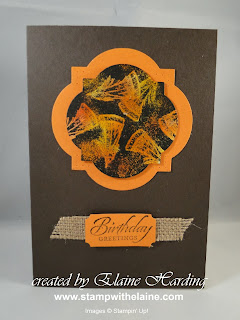 Here are some of the cards they made. 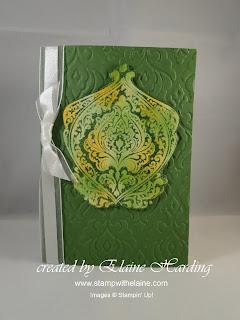 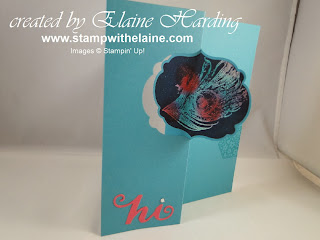 Which is your favourite?  Mine is the flip card on the bottom.  I love the Fine Feather stamp set but haven't had the opporunity to use it until then.

Merry Christmas to all my blog readers and followers! 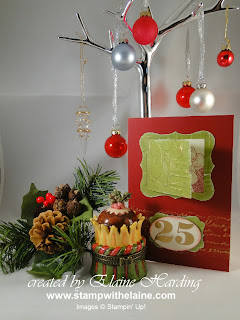 Here's a close up of the card. 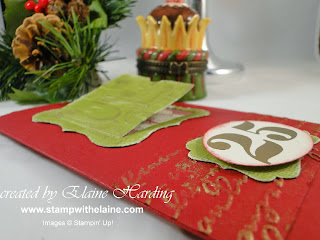 Here's wishing you all a very merry christmas and a very happy festive season with all your loved ones.

I made so many Christmas cards for the display stand at Sandown but haven't had the opportunity to share everything so I'm just trying to squeeze a couple in before Christmas Day! 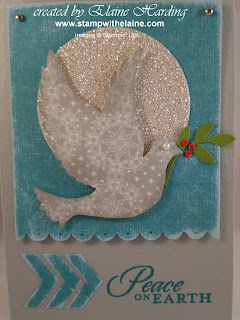 I used punches to decorate this card and silver glimmer paper. 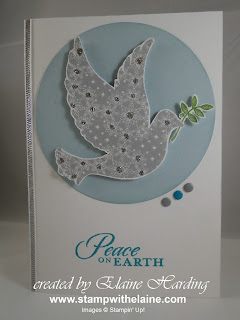 The Whisper White layer had a 2-1/2" circle punched out so you could raise the window  layer in its entirety, then popped the Calm Christmas dove with dimensionals on top.   Using a two-way glue pen, I applied glue in dots and sprinkled with glitter.  The leaves were hand trimmed, and candy dots added to dress it with. 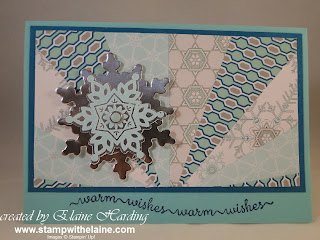 This one uses scraps of DSP, to create a "sunrise" effect and I love the candy dot which has been popped on to a brad.  I stamped and embossed the smallest snowflake with pool party embossing powder on a window sheet, die cut it with the corresponding die from Festive Flurries, and a larger flurry die cut from the silver foil cardstock then layered and held in place with the candy dot brad. 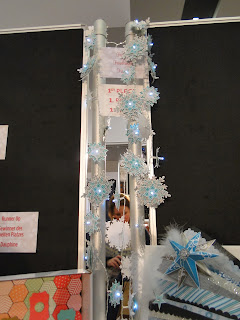 I've saved this winning entry from France to last.  It was sheer genius to use LED lights and the Festive Flurry stamp and dies to make this garland!  Just think how many hours it must have taken to stamp then die cut  all the snowflakes!    There were several layers for each led light.

Had I been home for christmas, I would've made one myself - maybe next year!

This is Week 12 of my countdown to Christmas and the last one in the series.  I've deliberately scheduled it to finish the week before Christmas so that if this takes your fancy, you'll still have time to make this. 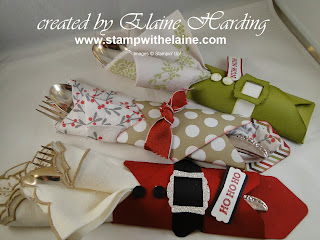 Enjoy!  Now who would've thought that the humble envelop punch board could be the key to so many different projects?  Have you got yours yet?


I hope you've enjoyed this series of Countdown to Christmas 2013. Thanks for stopping by and pop back for more inspiration on my Stampin' Up! sojourns.

Anyone with a shoe Fetish? 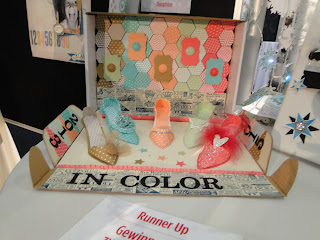 Yet more amazing creations - where do people find the time?  I'd always wanted to try making a shoe/slipper????  so to have made five......I'm speechless!!!

As enjoyable experiences go, I think this one will feature among the best of the best! So for my Sunday share, a snippet from my diary whilst on  our Ozzie trip visiting my family and old haunts.  Hubby had pre-booked a tour while we're in Perth to swim with the dolphins - these dolphins are  wild and in their natural habitat and it was luck of the draw whether or not they would make an appearance, but make one they did!

Before wrapping up the tour, a group photo on back of the launch, most of us back in civvies minus those wet suits - they weighed a ton when you got out of the water!

Proof that I actually took to the water, top left of 1st convoy, 3rd one along  where hubby is just about to divest me of my belt!

My hubby is on the end bringing up the rear wearing an anti shark electronic device round his ankle.  Eeek!  You heard right, but we were assured that we would be safe, as this is a deterrent after all!

This is another group and you can see the pod of dolphins in this pic much better.

Last but not least the Dolphins!  A bit of fact for you in case you're interested but also to record it so I don't forget! These are the more common Bottlenose dolphins, the genus Tursiops Delphinidae oceanic dolphin.  There are two species, the common Tursiops truncatus and the Indo-Pacific bottlenose dolphin - the Tursiops aduncus. I think if I remember the guide's lecture - these were the aduncus.

They live in groups of 10-30 members called pods.  Their diets consists of foraged fish and they often work as a team to harvest fish schools but they can hunt individually too.  They use echolocation, similar to sonar, and emit clicking sounds and listen for the returning echos to determine the location and shapes of nearby objects and potential hostile prey.  They also use sound to communicate - like squeaks, and whistles emitted from their blowholes or through their body language like leaping through the water and slapping their tails on the surface of the water.

Unusually, we had a male dolphin swimming with us, they are bigger and darker than the females. The females tend to the young and swim in groups but the males don't. The reason why is because he had been dining on the barbs of the poisonous puffer fish. Some members of the tour group had seen a school of puffer fish, they are extremely poisonous to humans and can paralyse and kill a human within hours, but they are harmless to dolphins. The tour guide reckons that he must have got  high on it and joined the rest of the pod to play!

How lucky am I, I'm still grinning from ear to ear!

Email ThisBlogThis!Share to TwitterShare to FacebookShare to Pinterest
Labels: Australia 2013 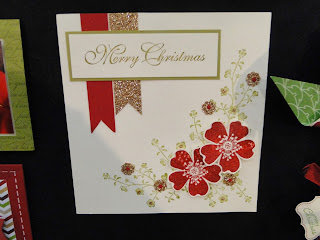 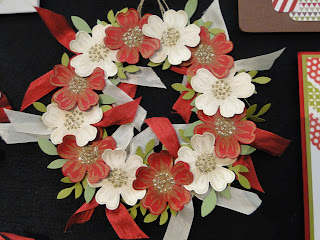 These aren't my creations, but were on the Display Boards at Convention.  It just goes to show that any stamp set has the potential to be used for any season, and/or any occasion!

The display boards were amazing and I honestly wouldn't be able to choose a favourite.  It's quite humbling to see so much talent out there - all different styles from the very detailed and some less so but with a zing to them so that they would work very well for Workshop Wows!

I LOVE Convention!!!!  Have you ever thought about joining the Stampin' Up! family? ... and if you already belong, I'm sure my fellow demos will testify what a blast it is! 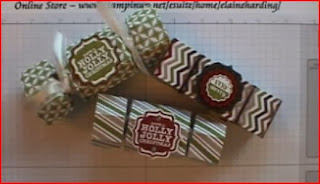 This is the penultimate video on my Christmas Countdown program.  This week's video is on table favours using the envelop punch board.  There are a lot of tutorials out in cyberspace with the four sided version of a christmas cracker.  My tutorial will be on a six sided one.  Here goes…...

I'm having manually upload this on to my blog, and bearing in mind there is an +8 hour difference
this post might appear somewhat earlier than I intended as I'm working on Malaysian time, and this post is on GMT.

Enjoy - hope you find it useful and are inspired to make some of your own.

With effect from 10 December while supplies last, there is 80% off on selected retired products.Visit my online store, create an account if you haven't already - happy shopping and look under clearance rack to see what bargains can be had.

There is a flat rate shipping charge of £4.95 and all items will be delivered straight to you.

Posted by Elaine Harding at 21:17 No comments: 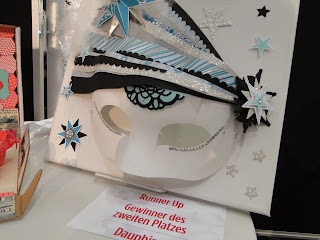 I thought I'd share this photo of  Dauphine's mask! Petra will appreciate this!  It's very mardi gras and reflects my holiday mood!  Jetting off to sunnier climes while it's freezing in bonnie England!

Will be strange spending christmas down under where it will be hotter this time of year with my Mum, but stopping off in Kuala Lumpur to break the journey, then back to my old alma mater in Perth, hopping to the sunshine coast for a few days with my sis, then finally in Melbourne for the festive season.

I've scheduled my blog posts so do pop back to visit and whenever I get wifi, you can follow my exploits on Facebook.

Posted by Elaine Harding at 13:07 No comments:

Email ThisBlogThis!Share to TwitterShare to FacebookShare to Pinterest
Labels: Convention 2013, Runner up 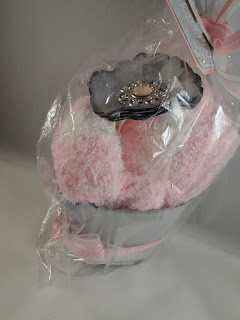 Here are roomie gifts from the lovely Petra - a popsock cupcake!  Adorable! 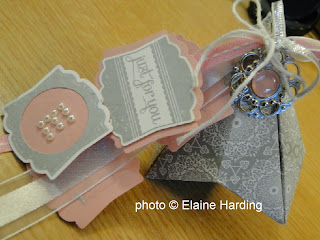 And this clever contraption which I am still loathe to open as it is so pretty!  Don't you just love the way Petra's  spelt my initial with the pearls? 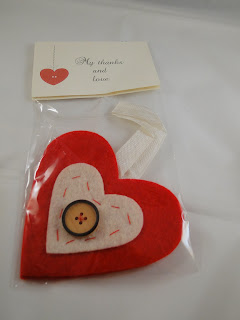 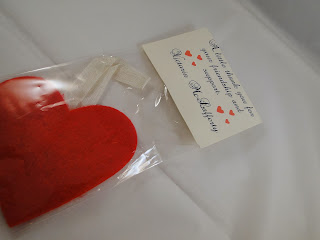 and this lovely felt heart made by Victoria and an MDS label!  So proud and priviledged to have them as a part of my team.

Email ThisBlogThis!Share to TwitterShare to FacebookShare to Pinterest
Labels: Convention 2013 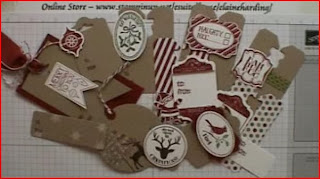 Here we are in Week 10 of my Christmas Countdown series.  This week's Workshop Wow is in 2 parts - lots and lots of ideas for gift tags in approximately 10 minute bites - so dip into it at your leisure.

Thanks for stopping by.

A Whole lot of Love

Forward planning for next year's Valentines!   If you're like me, you're thinking, but we need to get christmas over first!  Perhaps this could be a christmas gift so it is something that the lucky person who receives it will be well prepared! 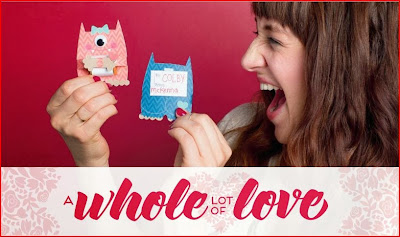 I just love those Monster Hugs - blue for boys and pink for girls pictured above!  Holds a single chocolate and it has extra long arms to wrap around the chocolate! 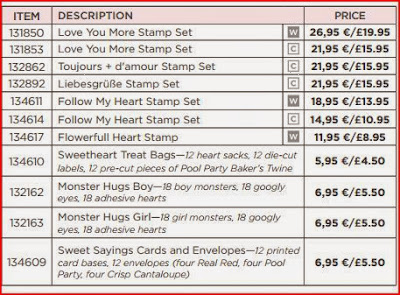 Posted by Elaine Harding at 11:59 No comments: