Originally, I was going to make a box to house these hand-made soaps and lip balm when I discovered that they fitted perfectly in Stampin' Up!'s Tiny Treat Boxes!  I received a beautiful wedding favour from the lovely Danni who lives in Germany and her wedding favour inspired these.

You've probably heard me mention that I was going to attend Stampin' Up!'s OnStage Live event in Salt Lake City this year. It was a wonderful  opportunity to meet with a couple of Demos I met last year at the Brussels event and to pick up where we left off.  I wanted to take them a little gift, not just a swap card, and I wanted something quintessentially English, other than tea!

I found these adorable hand made soaps with a single English Rose to adorn it............. 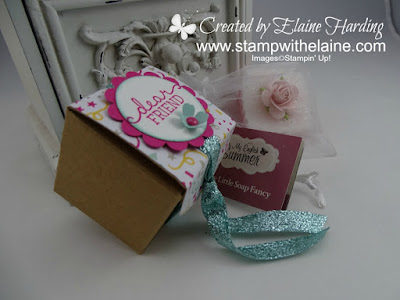 Then I found these beautifully packaged lip balms in a tin - the lid sported a sepia photo of lady with beautiful hair scooped up into a bun and nestled in that bun was a sculpted rose. 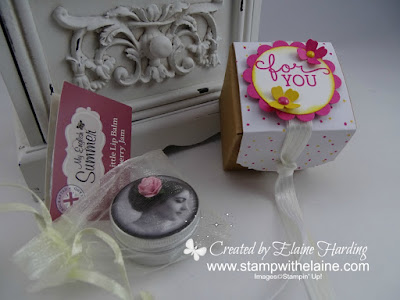 The English Rose, I thought - seemed appropriate to take a "slice" of England to them!


I feel a bit guilty I haven't been able to share sneak peeks at time of writing, because I have no information to hand - I have yet to attend OnStage, and yes, this has been written 5 weeks in advance!

It wouldn't surprise me if there's been a compulsory blackout temporarily, but I will post sneak peeks as soon as I get the all clear!

My thanks goes to Dena Rekow for the inspirational technique and especially for introducing me to Glad's press n' seal!  I've not seen it at the supermarkets and sourced it from Amazon and just love it especially for this technique!    I've deliberately left the sentiment out so I can add it later depending on what occasion I need it for!

I shared this with my club ladies in May's class.  The loved it and found it quite therapeutic.  Enjoy! 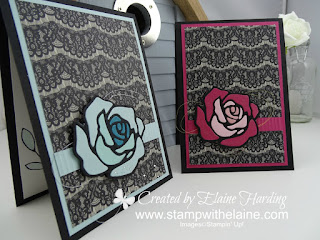 I've only been back barely a week, and it feels like I've never been away!  Still chasing my tail and trying to get over jet lag.    On top of that, I've been poorly but life must go on!

Better late than never, so the saying goes.  I finally finished unpacking and rescued my box of swaps from Salt Lake City and sharing here!  Having to re-learn how to make videos, after such a long break!  Oh dear!  Enjoy! 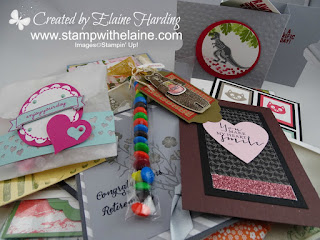 Big News! Be the Star!

I think it's safe to post this now.  At time of posting, I had no idea whether the Big News or Be the Star stamp sets  survived the cut.  If it hasn't, then I'm just in time for using it before it's retired!   This was specially designed for a member of my lovely team who  promoted in February/March 2016.  It's a shame that the camera hasn't picked up the lovely Wink of Stella on the star.

I stamped a star on the card front and a second one on a piece of scrap which was cut out with the Star Framelits.  I scored along all the lines and alternated Mountain and Valley folds along the star to create the 3d look and attached it to the stamped star with double height dimensionals in the centre to make it pop. 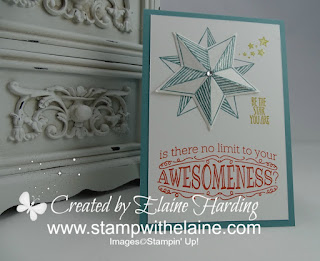 Everything else was simple stamping and I did use a stamp-a-majig rather than chance doing it by eye and stamping it crooked! 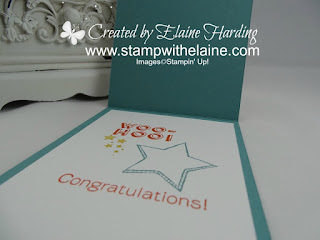 So proud of you Danni!  Congratulations and well done for promoting to Bronze Elite!

Posted by Elaine Harding at 00:30 No comments:

Email ThisBlogThis!Share to TwitterShare to FacebookShare to Pinterest
Labels: Be the Star, Big News

Bear with me - I've only just got back and although OnStage happened over a month ago, I've been away all that time so haven't really had a chance to share!

In a "galaxy far, far, away,  (read United States of America)  live many long standing talented Stampin' Up! Demonstrators, some awesome Million$ Achievers and current members of the Artisan team who I was lucky enough to meet.   You'll recognise most of them, but this video template restricted how much text I could insert so I've recapped on some of the pictures to highlight who's who!


When Stampin' Up! revamped the way they did Convention, they had a main event called OnStage Live at a host city/market and all the rest globally would hold OnStage Local events for their respective area/market.  This opened up attendance for Demonstrators all over the world  to attend the OnStage Live event wherever it was being held.  Every six months The Onstage Live event rotate to Europe,  North America, and the South Pacific (Australia).   In fact the next OnStage Live event in November will be held in Brisbane and then in April, 2017 it will be coming back to Europe.

The Inaugural OnStage Live was held in Brussels last November. A handful of American Demonstrators and other Nationalities took the opportunity to visit Europe and that's how I met Phyllis and Tamra, both Demonstrators from the USA and I was Tamra's Roomie. When the announcement was made that the next OnStage Live event would be in Salt Lake City, you can see why I leapt at the chance of going to visit America!

I have to say a huge thank you to both Phyllis and Tamra for their hospitality - both have been so kind and generous and I feel humbled by what big hearts they have. There's definitely a more relaxed feel to OnStage Live  in America. There was a live band before the serious stuff started, and much singing and dancing going on in the aisles!


Here's Phyllis walking across the stage in recognition of her amazing 600K plus sales - WOWSER! Congratulations Phyllis! 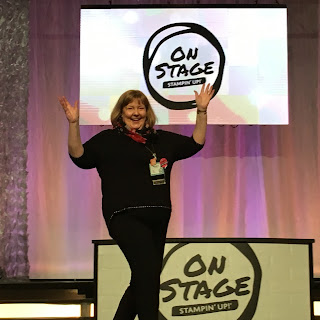 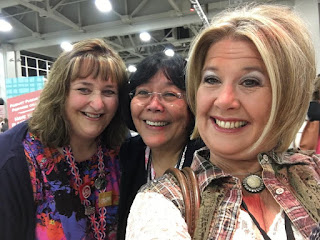 You can see from the grin on my face jus how excited I was to be there and Kimberley van Diepen who is one of the Artisan design team this year graciously posed for a selfie with us!  In fact she took the pic claiming that she's awesome at taking selfies! Next to me is my fellow teamie, Sally who I was so pleased to have sharing this whole experience with me too. 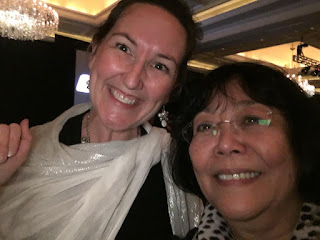 I bumped  into the lovely Meg Loven - I've been following her for years and I couldn't believe my luck to have a photo call with her too at Centrestage  in the evening.  Her flight was delayed due to bad weather the following day and we ended up having a meal together with a couple of her friends too. 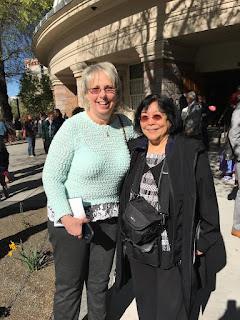 After Onstage Live, we happened to bump into the lovely Linda Bauwin who is the latest Million$$$ Achiever outside the Concert Hall in Temple Square.
My cup certainly ran over and it fulfilled a life time's dream of attending and meeting some of the people who have been my inspiration since joining Stampin' Up!

Still on cloud 9 from our epic road trip, but that's a tale, or several tales for another day!

Posted by Elaine Harding at 07:45 No comments:

Biscotti in a Matchbox - Yum!!

Something scrumptious nestling in a Matchbox waiting to be eaten!  These were my April Thank You gifts.  Enjoy the video! 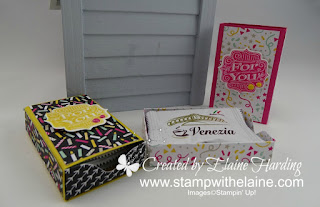 As the title says, the images in this stamp really is timeless - so in my book it's a Keeper!!!    Simple stamping to create a back drop, or do the unexpected.  Curious?  No spoilers here - you'll have to watch the video!!!  Enjoy! 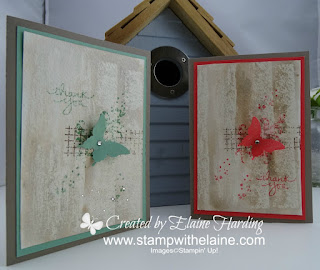 Here's the list of items I used.  Don't miss the footnote, scroll down to the bottom of the supply list!

Just a footnote - I love how joining and being a Stampin' Up! Demonstrator has given me so much to be thankful for especially the friends I've made along the way from far and wide - case in point the wonderful Tamra Davis from the USA and my lovely stampin sisters from UK, Petra and Helen  and myself travelled up to London today to re-connect with Tamra who we met in Brussels as she was here in London for a short visit. 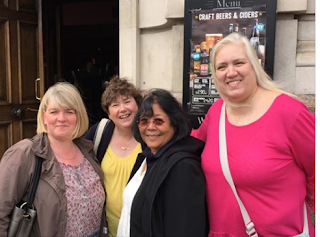 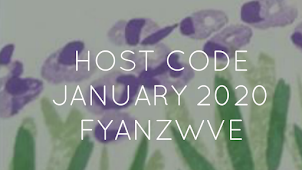