More stocking filler delights this week, but with Santa's little helpers - Jolly Friends.  The test tubes were sourced from Amazon and I finally get to use those Tags and Labels Framelits dies which have been sitting on the shelf for almost a year waiting patiently for its first outing!!!  (says she who is now blushing bright red!!!)

Even more surprisingly,  in all my years, this is the first time I've ever seen or tasted "millions"-an apple flavoured chewy sweet in the shape of tiny balls which I discovered quite by accident in the post office while waiting for hubby to post his stuff. Being a Saturday, the queues were long so I had time to kill!  They were perfect for my test tubes and this project was born!  Enough of my waffle - roll video!

Note:  At the time this post was published, YouTube had removed the video saying I had violated community guidelines.  They have since retracted their statement and reinstated the video.

In the meantime, I received emails from subscribers saying that they couldn't see the video, so I am re-posting this on Tuesday 22 November so it will appear in their feed again.

So sorry for the inconvenience! 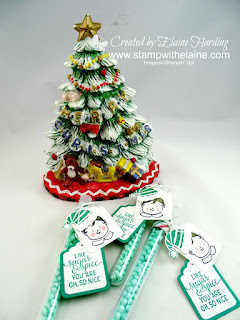