Hello everyone!  Couple of weeks into the new year, and things are finally getting back to normal. We'll just gloss over the fact that the dishwasher packed up just after christmas and the vinyl fronts on our kitchen units have blown so we've been running around trying to get the whole lot replaced as we can't get the same design as the existing ones because they have been discontinued!  Not the most auspicious start to 2017, but hey ho - life soldiers on and we have to wait till February for them to come and do a refit. Rant over - back to  sharing some cards.

I introduced my ladies at card club to the Special Reason Bundle which comprises  the Special Reason stamp set and Stylish Stems Framelits  in my very first class of 2017.  It was a little departure from how I usually run the class which is to do one technique  and they make 3 cards using that technique.

Truth be known, straight after the festive period, and having house guests threw my schedule out.  I wasn't organised enough to sort out class content before christmas so I literally had less than 24 hours to pull something out of the hat pretty quick!  I hit on the idea of featuring the one stamp set and its coordinating dies.  It was quite a challenge not to use the same stamp or die for each card!  My ladies loved it but this is a one off because it is more in line with a product based class and not card club! 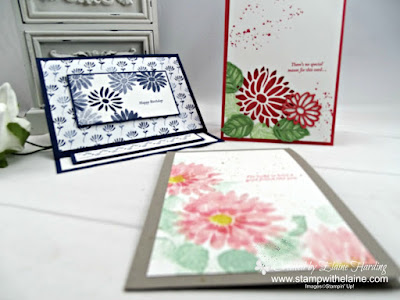 The reason I chose this set was because the coordinating dies in this set can cut both a negative and positive image which you can see on the right.  The negative die cuts  the floral image but leaves the bits surrounding the petals in tact.  The smaller flower's negative die cut is on the blue card on the left, but the positive flower has been die cut with another die which follows the contours of the flower and cuts out the flower as normal and you can see it nestled next to the larger floral negative image on the card on the right.

I wanted to show the different ways you could use this set - not just with die cuts, so for my final card just some simple stamping with a twist.  We used shimmery white cardstock because it's more absorbent than Whisper White.   I inked up the stamp, then removed the ink from the flower centre with a baby wipe, and using markers to add different colours, then misted the stamp with a spritzer before stamping to create this watercolour effect.

Thanks for popping by. 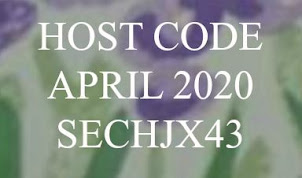