I often wonder where the quintessentially tradition of taking "Tea" originated.  My go to tipple during the day is usually tea, although I like coffee in equal measure, but usually have that as an after dinner drink, and if it's in the evening, probably the de-caffeinated variety.

According to history, afternoon tea was introduced in England by Anna, the seventh Duchess of Bedford in 1840.  At around four o'clock in the afternoon the Duchess became hungry and as the evening meal wasn't served till eight o'clock, the gap between lunch and dinner was too long a gap without sustenance.  The Duchess asked that a tray of tea, bread and butter and cake be brough to her room during the late afternoon.  It became a habit and she began inviting friends to join her.  Some time later, the Earl of Sandwich had the idea of putting filling in between, and the sandwich was born!  Pausing for tea soon became a fashionable social event and during the 1880's the upper classes and society women would change into long gowns, gloves and hats for their afternoon tea between four and five o'clock in the afternoon.

Back to the card - The Tea Time set looks like fine bone china variety - and usually Royal Doulton tea sets have a white back ground and gold leaf with a floral pattern.

I found stamping in versamark "free hand" really challenging because I couldn't see where I'd stamped and where to place the stamps for the floral images.  Cue the Stamparatus!  If you haven't got this tool, you certainly need one because it can help you do so many things - roll VT to see how! 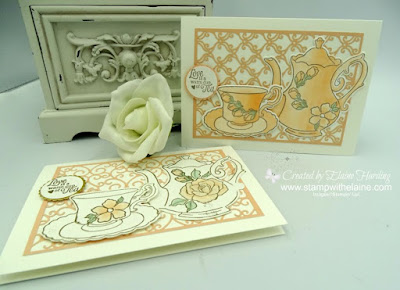 Please note that the Tea Time Framelits is a Level 2 Sale-a-bration item, FREE with a qualifying purchase excluding shipping/handling. 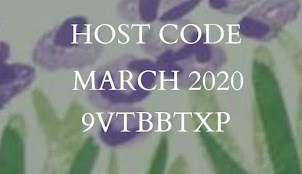